It’s always nice to mix things up a bit. We know you’ve all been loving Reesie’s online Yin Yoga classes, but this week she’s given us something different! This easy-to-follow, 10-minute ab video targets the core and warms up the abs just right. As a long-time yogi and surfer, Reesie knows just what movements every surfer needs to maintain the perfect balance of strong and flexible. All of us have been so grateful for these online classes that have kept us centered, strong, and in tune with our bodies during the pandemic!

Our advice? Pair this quick ab workout with Reesie’s Yang Yoga class or tag it onto to other short workouts that you love!

As always, donations for Reesie’s online classes are gratefully accepted at Venmo- @Cherise-Richards or PayPal at reesier@yahoo.com

Do you ever find yourself paddling for a ton of waves only to actually catch a few? Or do you find yourself feeling off-balance and slow while you’re paddling out? A few years back we made a paddle tutorial that may help you to improve your technique. It’s short, sweet, and right to the point!

The video below covers a few tips and techniques that will help you improve on the strength and length of your stroke, as well as your balance and control. It also includes a few things to avoid doing while you’re paddling.

We hope this paddle tutorial is helpful! You can check out more surf tutorials on the Surf With Amigas YouTube channel here. As always, please let us know if there are any other surf-related tutorials you’d like to see.

The spine is the highway connecting the brain to the body and is home to our spiritual centers, the chakras. It has 76 joints and 24 bones. It’s a big deal. Stretching to maintain a well-oiled spine is vital because it helps to keep the body mobile and fluid (and ready to surf).

The spine is a big deal

Grab one block and a few pillows (or a bolster if you have one), then click the video below to dive in!

Donations for Reesie’s online Yin Yoga classes are being accepted at Venmo – @cherise-richards or paypal – reesier@yahoo.com

Lost your stoke? Need some new reads to get hyped for your next surf adventure? Open up one of these books and take a journey with inspiring surfers in search of incredible waves. 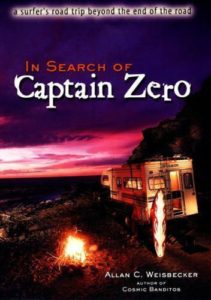 In Search Of Captain Zero

a surfer’s road trip beyond the end of the road

My favorite surf book ever. This book really captures the essence of surf travel and it opened up my mind to the wild magic of Mexico.

On his journey from New York to Central America in search of a long lost friend, Allan finds himself in some wild places, surfing empty waves and gathering clues of his dear friend Captain Zero’s whereabouts along the way. This book is hilarious and entertaining from beginning to end and it really inspired me. I still dream of driving through Mexico and Central America! Maybe one day. As far as I know Captain Zero is still living there in Mexico- my sister ran into him a few years ago in Panama and they surfed together. 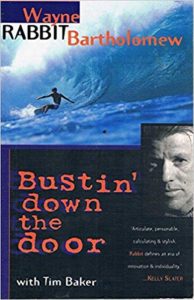 Bustin’ Down the Door

I read this book while living in Hawaii. The author, “Rabbit”, is an Australian surf legend who writes about his adventures in Hawaii in the winter of 1975 where he was almost chased out, first by locals, then by huge waves crashing through his front door in the night.

After reading this book I moved to Australia and eventually met Rabbit at Southern Cross University where I was studying Sports Management “surfing studies”. I remember during his open discussion he asked the students if we could leave our desks and sit in a circle on the floor instead. Legend indeed. 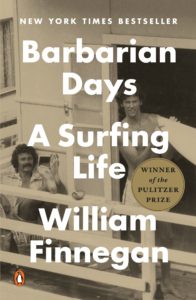 “The particulars of new places grabbed me and held me, the sweep of new coasts, cold, lovely, dawns. The world was incomprehensibly large, and there was still so much to see. Yes, I got sick sometimes of being an expatriate, always ignorant, on the outside of things, but I didn’t feel ready for domestic life, for seeing the same people, the same places, thinking more or less the same thoughts, each day. I liked surrendering to the onrush, the uncertainty, the serendipity of the road.” — Finnegan

This quote taken from Barbarian Days really sums up the excitement of surf travel. Never knowing what is around the next corner, traveling to new places, exposing yourself to new cultures, and embracing the unexpected. I read it in a just a few days! After reading I starting thinking about surfing bigger waves and began training a few weeks later too!